My rating: 3 of 5 stars
What this book is about(if you haven’t read the first book, The Darkest Minds you should skip this review. Spoilers ahead!):

Ruby is now a vital part of the Children’s League as a Leader of a small group of kids. Vida, a Blue girl with a big attitude, Jude, a yellow guy who doesn’t understand danger and the way this horrible world runs and Nico, a Green computer whiz. A few months have past since Ruby swiped Liam’s memory clean of every single representation of her. Now she is a trained agent who is not afraid of her Orange abilities anymore. Now she has to use these abilities to leave the Children’s League and find Liam, the same Liam who doesn’t remember her name, and retrieve from him something of great importance for the future of all the Psi kids in America.

One thing I know for sure about this series is that if I read it when I was 16 I would have absolutely fallen in love with it. This is a great series for adolescents who are into dystopian adventures. As an adult now, I still enjoyed it but it’s not the literary diamont I was waiting all my life to read. This is a fun, fast-paced adventure, full of action and enough twists and turns to keep things interesting until the very end. It is rear from a first-person perspective, as was the first book in the series, and we follow Ruby and her new friends, Jude and Vida. Never Fade is approximately as big as The Darkest Minds and it continues off, some months after the end of the first book.

Everything about that place withered you down to your worst, and it didn’t matter how many years passed – two, three, six. In that green uniform, locked in the same monotonous routine, time stopped and sputtered like a dying car.

The story of the first book is, in my opinion, much darker, compared to this second book. Never Fade doesn’t need to introduce us any more to the harsh reality of life for the Psi kids and so we are more interested in the relationships between the characters but also the conspiracies taking place in the U.S. government and the Children’s League. Many things that we didn’t know after the first book are slowly unravelling for us but there are also, still, many new surprises and secrets to find out throughout the book. The story starts of with the first three chapters all ending in cliffhangers that just made me want to read on and find out what is going to happen. And, as you would expect from Alexandra Bracken after reading The Darkest Minds, the last 100 pages of the book really pick up the pace and the action and thrill climb to their peak.

I used to dream about turning back time, about reclaiming the things I’d lost and the person I used to be.
But not anymore.

We are introduced to a whole new cast of important characters in this book which was a little strange in the beginning, especially after getting to know Liam, Chubs and Zu so well. But the new guys are a great addition to the story and the writing style of the author really allows the reader to understand and know them in depth. Ruby has become more mature and taken up new responsibilities about her powers that she didn’t want to have. This has opened so many new doors and possibilities for her. Jude is like the little brother that Ruby never had and they are funny and very enjoyable to follow together. Finally, Vida is a character that made the story more realistic. Be warned though, there is a lot of heavy, I would say, cursing in this book that might not be appropriate for very young teens. This is another difference from the first book in the series.

And the very first rule, the only one that mattered when you got to the moments between terrified heartbeats, was that you always, even in the face of fire or death or capture, always had to follow the Leader. 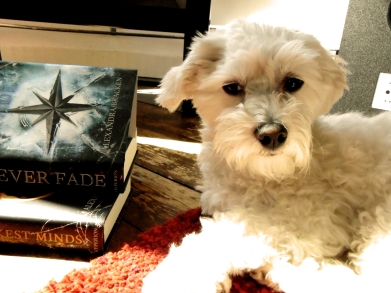 One more thing that really helped this book advance was the writing style. It’s simple but very descriptive and powerful. Alexandra Bracken writes to the point and doesn’t use excessive sentences to get her message across. This makes the book very enjoyable and easy to read and the time flies by before you know it. There is a lot of character development taking place as Ruby comes to accept her Orange abilities. There are new adventures in which our characters get into. There are conversations and confrontations of great importance for the future of all the kids. This book is full of fun, engaging content which the author has efficiently presented in 500 pages without becoming overwhelming or boring.

As I said, as my younger self, this series would have been perfect for me. To be honest, now that I’m thinking about it, this would probably also make a great movie. I had a nice time reading this second book and I’m excited to pick up the third and final novel to see where the story is going to end and where our characters will end up. I urge you to pick this up if you enjoy dystopians or YA sci-fi/fantasy.

One last thing to mention is that, as you could see, I had the help of my lovely assistant and model, my dog, Ziggy. If you’d like to see more of him and my other puppy Rhea, take a look at my dog blog Pups Unleashed. 🙂

I’m a BookDepository affiliate. If you want to buy a book online (free worldwide shipping) and you go through my links (below), I’ll get a small referral commission. Thank you very much for your support! 🙂

BookDepository: Never Fade (Book 2)
View all my reviews and add me on Goodreads