We are back in 1812 and Arabella aged 16 is playing with her brother a game of shorosh khe kushura. She is determined that this time she will be able to beat him. Life is simple and beautiful for Arabella who lives on Mars with her family. But when a small accident sends her mother reeling, she is forced to return back to England on Earth with her two younger sisters. Because Mars is not a proper place for a young lady and Arabella needs to learn how to behave like a British young woman of her age. A year later Arabella and her family receive the devastating news of her beloved father’s passing on and of her brother’s new right to the family’s plantation on Mars. But Arabella also learns that her brother is in danger and the only way she can help him is by boarding on a ship back home to Mars.

Arabella of Mars is written by the Hugo Award winner of 2006, David D. Levine. David D. Levine is a science fiction author of more than 50 stories and has been short-listed for numerous prestigious awards, among them the Nebula award. His first full length novel, Arabella of Mars is 348 pages long, reads from a third person perspective and follows 17-year-old Arabella Ashby on her adventures to save her beloved brother Michael.

What is quite amazing about this book, first of all, is the wonderful conception to marry between interplanetary travel and Georgian England. If you think about it, there aren’t many stories out there that take place between 1812 and 1813 on both Earth and Mars. Here we have an alternate history novel with a female protagonist going on a great adventure disguised as a boy on a ship that can fly. That’s how people are moving from Earth to Mars, on flying ships. If it sounds cool that’s because it is!

And even though the distance between planets was so unimaginably vast…even though the news must be months old…even though it had been more than eight months since she had seen him with her own eyes…somehow, some intangible connection had still remained between her and her father, and at that moment she felt that connection part, tearing like rotted silk.
And she collapsed in sobs.

Arabella of Mars is a better science fiction story than Cinder. Is it wrong to compare? Maybe..But the reason why I chose to do so is because I’d like to urge young adult readers to go ahead and check this book out. It’s written in the YA way, and follows an adolescent protagonist in an epic adventure. The swear words are crossed out like so: f–k or d–n and there are very few (one or two) bloody scenes. There is no heavy scientific terminology and the premise is quite the opposite of overwhelming. The story is rather simple and straight forward and the book is light and fun to read.

As she rushed along, her brains rattling in her head from each blow of her heels on the path in Earth’s heavy gravity, she saw the coach come to the inn, draw to a halt, and the guard at the rear of the carriage hand down a packet of mail to the innkeeper.

Which brings me to my next point: this novel didn’t amaze me. Throughout the novel I was thinking: “okay, now it’s going to get better. Alright, now we are getting to the good part. This is it right here, things will go off now.” But this never happened. The story, to me, was quite predictable and the fact that it revolved solely or on such a huge degree around Arabella (the name Arabella must have appeared 50 times more than any other name) made the novel quite monotonous. I could have cared about more characters but they were in an overly obvious manner just background noise. Everything that annoyed me in this story is pretty much what annoys me in most YA novels, so one could deduct that I have outgrown young adult books or I simply don’t like them anymore. One thing I’m quite sure about though, is that this book will appeal to a great YA reading population.

And now she found herself in the thick of it. Lost, bewildered, friendless, nearly penniless, dressed as a boy in a suit of stolen clothes, she had to find her cousin Simon somewhere in this enormous crowd and stop him before he could take passage to Mars.

Even though I was very excited to receive this book, my feelings throughout the novel can be summarised as “meh, it’s alright”. Arabella of Mars is saved by the fact that it is a very fast-paced book with rapidly changing scenes so it’s quite difficult for the reader to feel bored. As I said, it really reads like something that would be loved by YA readers and is also a wonderful introduction into the science fiction genre. But, although YA readers will enjoy it, I’m not so sure about science fiction and fantasy fans. I do recommend you check this book out if you think that the issues I had with it would not discourage you from picking it up. 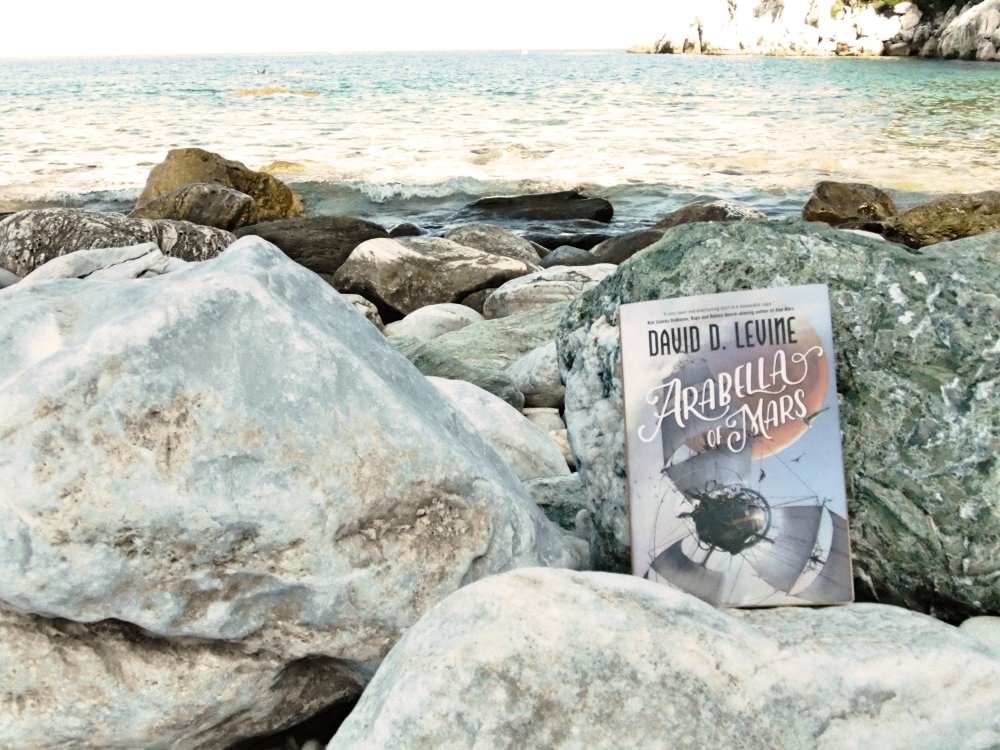 I received a copy of this book from the publisher, Tor Books, to review.

The pictures used in this review were taken in Ag. Ioannis in Pelion, Greece.