Book synopsis:
The Greek beauty, Sofia, has arrived in the Spanish coast of Almeria where the desert meets the Mediterranean sea, with her mother Rose. Taking a month off from their lives back in England, they have come to Spain in an arrangement to meet a doctor, Mr Gomes, that can, hopefully, cure Rose’s peculiar and unexplainable symptoms. While the nature of Rose’s condition is unknown, the mysterious illness has forced Sofia to delay her PhD thesis to care for her mother. They have both agreed that Mr Gomez is their last resort. 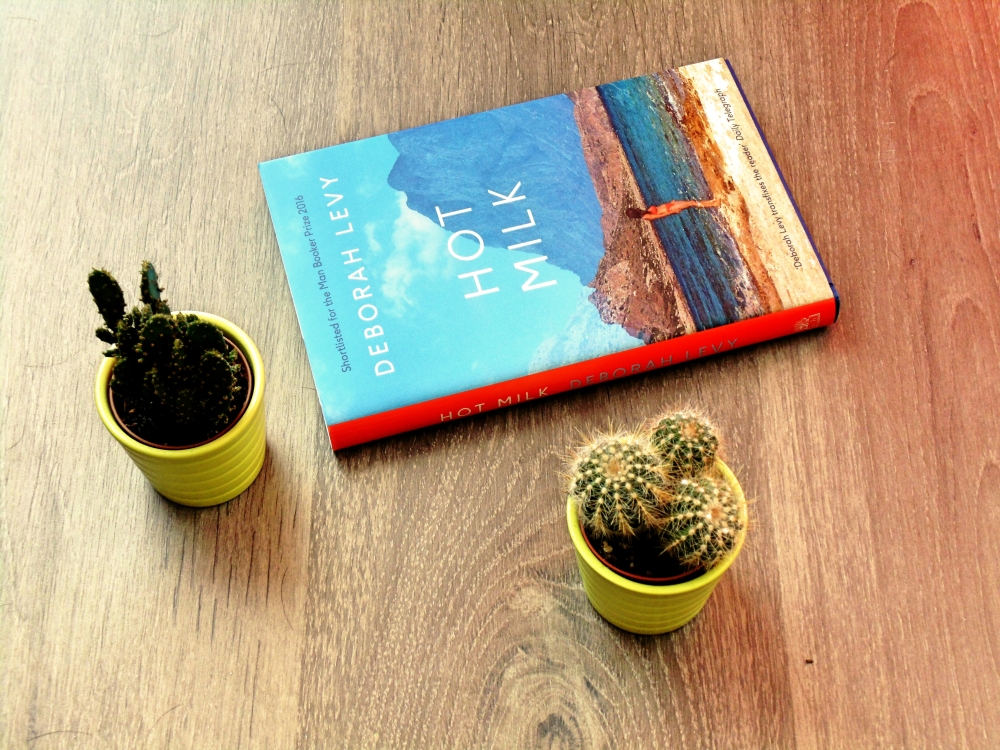 Here is a Man Booker shortlisted nominee that has created a chasm among the reading community, receiving 1 and 2 stars from some and securing 4 and 5 star ratings from others. Deborah Levy is an acclaimed author of a number of plays and novels, her first of which she wrote at the age of 27. Hot Milk is her second novel, after Swimming Home, to be nominated for the Man Booker Award. The story follows a first person perspective of Sofia, a half-Greek, half-British young woman, with a few short paragraphs of an, initially, unknown observer stalking Sofia, scattered throughout the novel before the beginning of a chapter.

There she goes. The beautiful Greek girl is walking across the beach in her bikini. There is a shadow between her body and my own. Sometimes she drags her feet in the sand. She has no one to rub suncream on her back and say here yes no yes there.

This seemingly short and quick novel is a mirage, a sheet covering many layers stacked onto this reading experience. One could read this book two or three times before referring to a review and still discover hidden meanings and details that were missed beneath the thin coating of words and sentences. On the surface, the reader is introduced to a rather peculiar atmosphere and a basic coming-of-age plot. Delving deeper, one can uncover the main theme of the story, freedom. Rose is, as it quickly becomes evident, a hypochondriac, a person that has learned to be ill, a woman who wants to be taken care of by everyone, a mother afraid and alone. Her illness is obviously psychosomatic but still very real and debilitating. Not able to move her legs she is deprived of her freedom to experience life without fear. Sofia has paused her advancement in the field of anthropology to care for her mother and has thus been living a life in captivity of her mother’s ailments. Sofia’s father, a figure that she associates with a man who freed himself from her mother’s needs and ran away to Greece to build his own life, is not actually free at all. He has surrendered to the imprisonment of his religious beliefs. Greece, a country living under economic austerity and the control of more economically independent nations, lacks freedom too. There are many more examples of themes discussing freedom and the lack of, throughout the story, for the reader to reveal and observe.

I dared not move to a less painful position because I knew she was scared and that I had to pretend not to be. She had no God to plead to for mercy or luck. It would be true to say she depended instead on human kindness and painkillers.

A baffling and also intriguing part of the novel involves the narration itself and specifically the dream-like atmosphere surrounding the plot. It feels as if the story is as blurry as the cover of the book copy I got in the mail. The landscape is sunny and hot, dry and dreamy. The community of Almeria feels like every single person is in on a big secret that the reader does not know, like an eerie, dark mystery that surrounds the coastal area. The sense of psychotic, drug-induced numbness is enhanced by the otherworldly dialogues between the characters. It feels like in dreams where, although you might be doing something peculiar or illogical, your mind pulls the strings of your sense of reality to make certain decisions or situations feel natural and well-explained. Furthermore, one gets the feeling that this novel is timeless. The plot fails, deliberately, to orient the reader to a specific point in time and provide any temporal reference from which to hang on to. It feels like floating in a sea filled with medusas harmoniously swimming around you.

If I were to look at my mother just once in a certain way, I would turn her to stone. Not her, literally. I would turn the language of allergies, dizziness, heart palpitations and waiting for side effects to stone. I would kill this language stone dead.

It is utterly possible, and rather evident, that Sofia’s dream-like experience of sexual revelations, self-discovery, openness to experience and introduction to the abstractly concrete meaning of freedom is a novel that will not appeal to everyone. I am certain that, had I read this book at another time, I would not have enjoyed it as much as I did now. The beauty and curse of Deborah Levy‘s novel lies with how heavily it depends on the reader’s interpretation. Many would find the water Deborah Levy offers always wrong be it hot or cold, but others would be happy with a bowl of banana and milk or plain hot milk.
By the end of this review, one should know if this novel is a book they’d like to read or not.