Book synopsis:
The empire of Annur is in turmoil after the treacherous murder of Sanlitun hui Malkeenian. Next in kin and in possession of the Unhewn Throne is his son, Kaden, who, living in the monastery of Ashk’lan hidden in the edge of the world, studies under his Umial unaware of his father’s demise and the imminent danger traitors to the Malkeenian line pose. In the South , Sanlitun’s other son, Valyn, is preparing for the most intense and dangerous trial to mark him one of the Ketrall, the fierce defenders of the Empire. In the heart of the empire, Adare, the sister of the young princes and daughter of the diseased Emperor, is furiously seeking justice and vengeance over her father’s assassination.

The Emperor’s Blades is a fantasy debut novel marking the first installment in the Chronicle of the Unhewn Throne trilogy. Since its publication in 2014, Brian Staveley has completed his first trilogy and has also written a standalone novel taking place in the Unhewn Throne universe. His debut follows the three different perspectives of Sanlitun’s children mainly focusing on the two sons’ adventures. This novel has received much attention from fantasy fans after being nominated for the Goodreads Choice Awards for the categories of Fantasy and Debut Author in 2014. Due to the high praises and many recommendations over The Emperor’s Blades I decided to pick it up as my first book of 2017. Unfortunately, it definitely did not live up to my expectations. 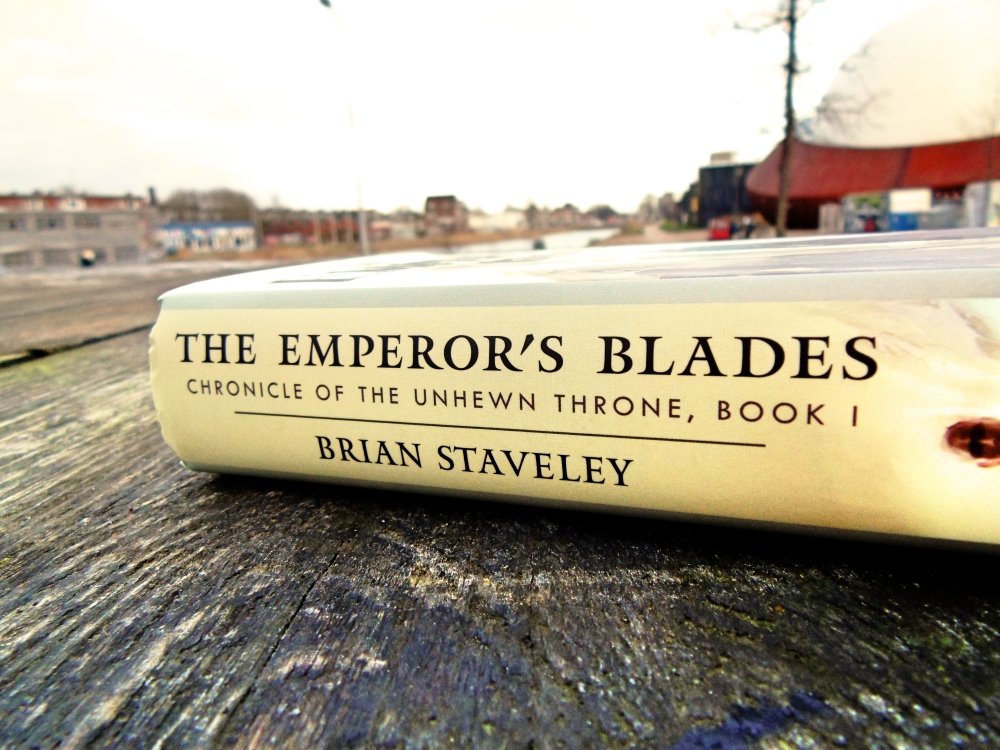 No; time passed, stars swung through their silent arcs, seasons gave way to the next, and yet none of these, in and of itself, brought harm. It was not age but rot that gnawed at the children, consuming their bowels and brains, sapping strength, eroding what meager intelligence they once possessed. Rot, and then death.

Sadly, The Emperor’s Blades opens the curtain with one of the most intriguing and engaging prologues I have seen for a while in fantasy. Staveley promises, in just three pages, beautiful, daring prose, shocking, brutal storytelling and ruthless, powerful characters. And then he snatches it all away. There are many issues with this fantasy debut, and it is incredibly saddening to see an author with such a talent for words and vivid scene composition to lack in aspects that are vital in successfully writing a grand fantasy story. Taking apart all the minor and major components of the novel and simply facing the plot, this is a promising story. Simple – definitely not the epic fantasy read many reviewers made it out to be – but interesting. In this and other respects, this book is a mix between young adult and adult fantasy. Many say this is a fantasy story heavy in politics, other’s say this is not fantasy but a mystery book. To me, The Emperor’s Blades had many fantastical elements (various magical creatures and animals, certain breeds of humans with some level of magical abilities) that firmly place it in the genre with the political story parts lacking in the much necessary complexity that depicts an author with attitude and swagger like George R. R. Martin.

The mind is a flame, the monks said. Blow it out.

I am usually not disturbed when women are depicted – in fantasy – as weak beings used only for breeding purposes and the sexual appetites of men. When done right, this is a wonderful small addition to world building, showing a savage, brutal society governed by lust, power and death. But Brian Staveley really managed to annoy me. Throughout the story, there is a strong, apparent need of the author to make it known that women are nothing. It is practically forced upon the reader to understand that. The author is trying way to hard to be one of those authors that show male superiority. This fact by itself would not have been that annoying, were it not for the additional urgency of the author to appeal to his female readers by showing that some women are strong and equal to men. And he fails miserably. Most of Staveley’s female characters are at best uninteresting and at worse completely unstable and acting very inconsistently with their character. I hate to compare authors here but George R. R. Martin presents both whores and women of power in his series and he does so in such a remarkable, glorious manner that Brian Staveley’s attempts after reading A Game of Thrones frustrated and angered me. Horribly bad female representation in the novel.

The Shin were great believers in pain. It was a reminder, they said, of how tightly we are bound to our own flesh. A reminder of failure. 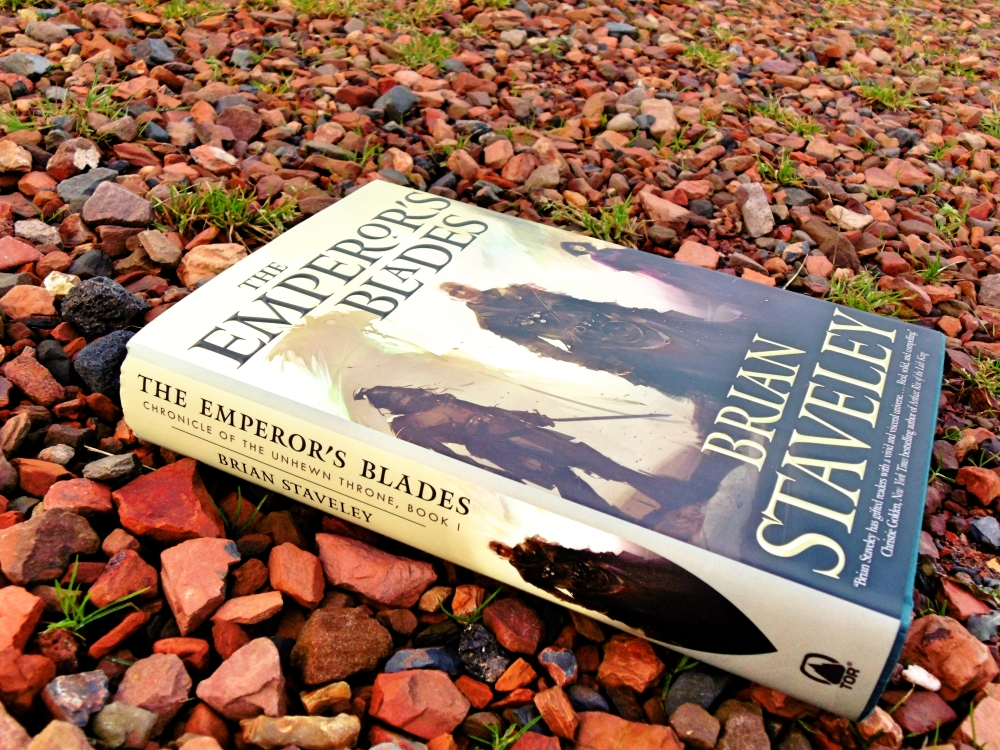 The female personalities were not the only crudely drawn parts found here. A fantasy novel is only as good as its characters and world-building (and storyline and prose etc.) and this debut lacked in both. Remarkably, we spend so much time reading from Kaden’s and Valyn’s perspectives but when we come out, I can’t say I felt close to them at all. Not them or any other side character found on their side. It is only at the very end that Staveley’s beautiful prose finds its way to some meaningful character building and development. Honestly, I do not care about any of the protagonists at this moment and I just finished the first installment in a trilogy. That’s bad. The characters are so mundane and blunt, changing in character to fit with where the author wants to take his story. Overall, deeply unremarkable protagonists, side characters that feel like thin mist in the background and peculiar, trying-to-hard-to-be-tough females. Ugh.

Obedience is a knife that cuts the cord of bondage.
Silence is a hammer that shatters the walls of speech.
Stillness is strength; pain a soft bed.
Put down your basin; emptiness is the only vessel.

Finally, Staveley took a risk with placing three characters in three different stationary locations acting completely separately from each other and the world. Were he a competent enough author, he could have pulled off this novel showing enough world building to give a sense of the vastness of the empire. Alas, world-building is one more element gravely lacking from the first novel. The reader is introduced to a small number of magical creatures, a small number of human “species” and a good number of Gods and Goddesses. Apart from that, the world feels small, unimportant, and thus, why do we even care what happens to it?
At heart, this first novel felt very much like a YA story of two adolescent boys going through the classic fantasy trope of training to become great, a formula that usually doesn’t fail as it did not in this case either. It is fun to watch boys grow and learn and go through difficulties their masters throw at them. In this respect, there is much potential to the story that I personally see as a YA fantasy novel with a decent deal of crude language and a sprinkle of blood and gore.

When you’ve only got one choice, you can bitch and moan, or you can draw your blade and start swinging.

This was definitely not the explosive fantasy beginning I was hoping to kick off the new year, but I am eager to pick up the second book, The Providence of Fire, after I recover a bit from the first one. I would be skeptical to pick this up if I were a big fan of great adult fantasy works, but for YA fantasy readers this is probably a fine choice and an enjoyable introduction to more adult-ish fantasy reads.
I’m a BookDepository affiliate. If you want to buy a book online (free worldwide shipping) and you go through my links (below) I’ll get a small referral commission. Thank you very much for your support!