With January officially behind us and February just starting to make an appearance, I think it’s best to begin with a wrap up of the past month.

In January, I successfully finished four out of the six novels I had originally planned on picking up and you can find reviews for all four of them by clicking the links below:

While I enjoyed most of these books, I also had my first DNF (did not finish) of the year! Quite early on, I decided to give up on the Parasitology trilogy by Mire Grant which starts with the first book, Parasite. This first book was extremely ridiculous in my opinion in the sense that I knew exactly what was going to happen in the end, the plot was poor, the story was very simplistic for an adult novel and the characters were completely boring and stereotypical. Simply put, it was not what I was looking for in a horror novel so I gave up reading this whole trilogy alltogether.

I still wanted to read a horror trilogy though, so I looked into the Goodreads Choice Awards for Horror and found – amongst other nominees – Scott Sigler’s Infected trilogy. I’ve read a small sample of Sigler’s work with his novel, Nocturnal, of which I read one chapter (I know it’s not much but at least it’s something!) and I found his writing style decent and enjoyable (again, small sample). So, I found on Amazon this first novel for 2.50 euros and just like that, I had my horror series alternative.

At the time this post is uploaded, I am currently in the process of reading the the three titles you see on the right. The Providence of Fire is the second novel in The Chronicle of the Unhewn Throne trilogy and I cannot say that I’m particularly enjoying it so far, to be completely honest. I am about 30% in the story and I have a lot of issues with Staveley’s characters. The Luminaries is going very slow for me. I was supposed to be about 76% done with it but I am a little bit behind schedule somewhere just above 60%. It might seem insignificant but this is a chunky novel which I am, thankfully, quite enjoying. And finally, I started reading Infected yesterday, since it arrived so late in the mail, unfortunately. So, you should expect to see reviews for all three of these books, unless I end up DNF one or two of them which I hope to avoid!

To Be Read in February

In February, I am planning on investing some time in reading a few brick-sized books and in continuing on with the trilogies that I started in January.

The Dark Forest by Liu Cixin translated by Joel Martinsen 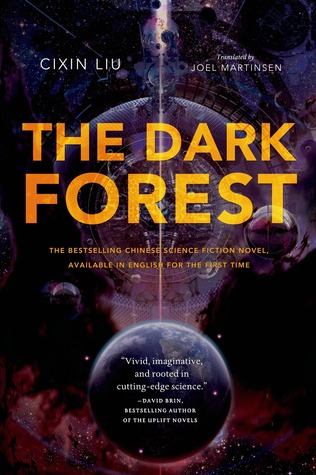 I am definitely picking up The Dark Forest by Cixin Liu which is the second installment in the science fiction trilogy, Remembrance of Earth’s Past. The Three-Body Problem tells an exciting and terrifying story that drew me in and I am very eager to continue with this popular trilogy and see where humanity will go! Book synopsis:

In The Dark Forest, Earth is reeling from the revelation of a coming alien invasion — four centuries in the future. The aliens’ human collaborators have been defeated but the presence of the sophons, the subatomic particles that allow Trisolaris instant access to all human information, means that Earth’s defense plans are exposed to the enemy. Only the human mind remains a secret.
This is the motivation for the Wallfacer Project, a daring plan that grants four men enormous resources to design secret strategies hidden through deceit and misdirection from Earth and Trisolaris alike. Three of the Wallfacers are influential statesmen and scientists but the fourth is a total unknown. Luo Ji, an unambitious Chinese astronomer and sociologist, is baffled by his new status. All he knows is that he’s the one Wallfacer that Trisolaris wants dead.

Under the Dome by Stephen King

I’m also expecting in the mail a copy of Under the Dome which is to be my third attempt at reading a Stephen King standalone. So far, I haven’t really enjoyed anything I’ve read from Stephen King but I force myself to keep trying. Under the Dome sounds very intriguing and I’m double excited to read it so I can finally watch the TV series. Hopefully, this will be one Stephen King novel I’ll appreciate! Book synopsis:

On an entirely normal, beautiful fall day in Chester’s Mill, Maine, the town is inexplicably and suddenly sealed off from the rest of the world by an invisible force field. Planes crash into it and fall from the sky in flaming wreckage, a gardener’s hand is severed as “the dome” comes down on it, people running errands in the neighboring town are divided from their families, and cars explode on impact. No one can fathom what this barrier is, where it came from, and when — or if — it will go away.Dale Barbara, Iraq vet and now a short-order cook, finds himself teamed with a few intrepid citizens — town newspaper owner Julia Shumway, a physician’s assistant at the hospital, a select-woman, and three brave kids. Against them stands Big Jim Rennie, a politician who will stop at nothing — even murder — to hold the reins of power, and his son, who is keeping a horrible secret in a dark pantry. But their main adversary is the Dome itself. Because time isn’t just short. It’s running out.

BookDepository: Under the Dome

Since Under the Dome is going to take me most of the month to get through, I am planning on picking up Tigana at the very end of February. This is another chunky one, but I’ve never read anything by Guy Gavriel Kay and so many SFF readers praise his writing style and storytelling. Book synopsis:

Eight of the nine provinces of the Peninsula of the Palm, on a world with two moons, have fallen to the warrior sorcerers Brandin of Ygrath and Alberico of Barbadior.
Brandin’s younger son is slain in a battle with the principality of Tigana, which the grief-stricken sorcerer then destroys. After sweeping down and destroying the remnants of their army, burning their books and destroying their architecture and statuary, he makes it so that no one not born in that province can even hear its name.
Years later, a small band of survivors, led by Alessan, last prince of Tigana’s royal house, wages psychological warfare, planting seeds for the overthrow of the two tyrants. At the center of these activities are Devin, a gifted young singer; Catriana, a young woman pursued by suspicions of her family’s guilt; and Duke Sandre d’Astibar, a wily resistance leader thought dead.
Meanwhile, at Brandin’s court, Dianora, his favorite concubine and–unknown to anyone, another survivor of Tigana–struggles between her growing love for the often gentle tyrant and her desire for vengeance. Gradually the scene is set for both conquerors to destroy each other and free a land.

Finally, if everything goes well I should be enjoying Infected enough in the next few days to continue on with the trilogy. This I will be picking up also at the end of February and won’t be done with it until the beginning of March. Book synopsis:

Across America, a mysterious pathogen transforms ordinary people into raging killers, psychopaths driven by a terrifying, alien agenda. The human race fights back, yet after every battle the disease responds, adapts, using sophisticated strategies and brilliant ruses to fool its pursuers. The only possible explanation: the epidemic is driven not by evolution but by some malevolent intelligence.
Standing against this unimaginable threat is a small group, assembled under the strictest secrecy. Their best weapon is hulking former football star Perry Dawsey, left psychologically shattered by his own struggles with this terrible enemy, who possesses an unexplainable ability to locate the disease’s hosts. Violent and unpredictable, Perry is both the nation’s best hope and a terrifying liability. Hardened CIA veteran Dew Phillips must somehow forge a connection with him if they’re going to stand a chance against this maddeningly adaptable opponent. Alongside them is Margaret Montoya, a brilliant epidemiologist who fights for a cure even as she reels under the weight of endless horrors.
These three and their team have kept humanity in the game, but that’s not good enough anymore, not when the disease turns contagious, triggering a fast countdown to Armageddon. Meanwhile, other enemies join the battle, and a new threat — one that comes from a most unexpected source — may ultimately prove the most dangerous of all.