Book synopsis:
On the night of Walter Moody’s arrival at Hokitika, in the hopes of making a fortune in the gold mines and tired after his long journey there, he makes his way in to the Crown Hotel where he finds an assemble of twelve men, seemingly going about their own business, smoking a cigar, playing pool or just having a meal. Soon, Walter Moody discovers that these twelve men have gathered in secret to discuss a series of unsolved crimes involving a dead man, a large amount of money, a young lad who has disappeared and the attempted suicide of a whore. Moody is quickly drawn into the solving of the mysteries and finds himself as part of the complex and twisted tale that started about a year ago and implicated the present company of men upon which he stumbled this January night of 1866. 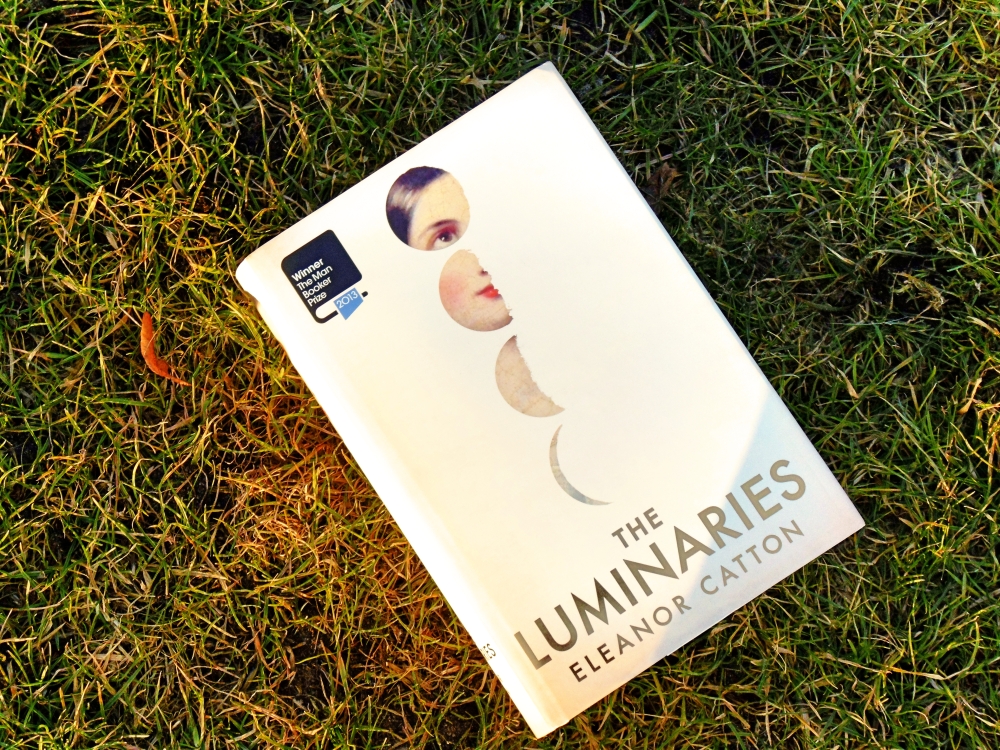 The winning title for the Man Booker Prize of 2013 belongs to the youngest author and the second New Zealander to ever receive the honoring award. At the age of 28 and with one published novel already in the market, Eleanor Catton wrote an epic historical mystery that took the judges by surprise. This “Victorian parody” as many people call it, takes place in 1866 in Hokitika of New Zealand and follows 19 characters who, through discussion, plotting and intriguing schemes, are involved into a series of unsolved crimes. Interestingly, Eleanor Catton seems to be one of those authors that are able to construct such a complicated story without overwhelming the reader.

What a strange, unbroken beast is adulation! How unpredictably it rears its head, and tears against the bridle of its own making!

Catton based her plot and characters to the astrological movements of 1865-1866. One can only imagine the amount of research she must have put into her wonderful novel which was 5 years in the making. The novel is divided into twelve parts and each part narrates the events of one specific day of each month of 1865-66, starting and finishing in January of 1866. As the cycle of the moon runs from full to new moon, so does this story. Starting with Part One (full moon) which is 380 pages long, and ending with Part Twelve (new moon) which is 2 pages long, the plot waxes and wanes as more pieces to the puzzle slowly make an appearance to reveal the final image. It is noteworthy, that Eleanor Catton does not believe in the power of astrological signs in predicting the future but more so in the power that people allow the signs to have on them. The way I see it, the inclusion of so much astrological jargon was completely unnecessary, yet it added to the ambience and mystique of some parts in the plot. It also served as a clever decorative element, a fine addition to the complexity of Catton’s conception and a true testament to her imaginative and brilliant authorship.

‘Prayers often begin as memories. When we remember those whom we have loved, and miss them, naturally we hope for their safety and their happiness, wherever they might be. That hope turns into a wish, and whenever a wish is voiced, even silently, even without words, it becomes a supplication.

Back in the 1860s, the ratio of men to women in New Zealand during the epoch of gold mining was 10:1 as men left their families in search of fortune and work. Eleanor Catton stays true to the facts of the era by introducing 19 characters, two of them being women. As one would expect, the two biggest representations of women in astrology involve Venus, represented by the lady of the night Anna Wetherell, and the Moon, who is portrayed by Lydia Wells, a woman who prides herself a fortune-teller. Moreover, as one of the imperative ingredients to brilliant historical fiction demands, the author eases the reader into the environment, show where and when we are and does a wonderful job in introducing her country and its history. With a diverse cast of characters, Irish, Scottish and Englishmen, Maori and Chinese men, Catton paints an accurate portrait of 1860s Hokitika. Opium, Laudanum, pistols, horses, gold, schooners, whores, and twelve men, all promise an intriguing story.

‘Some folks are dealt a bad hand. But you can’t rely on another person’s conscience to live the life you want to live. You make do with what you’re given; you struggle on.’ 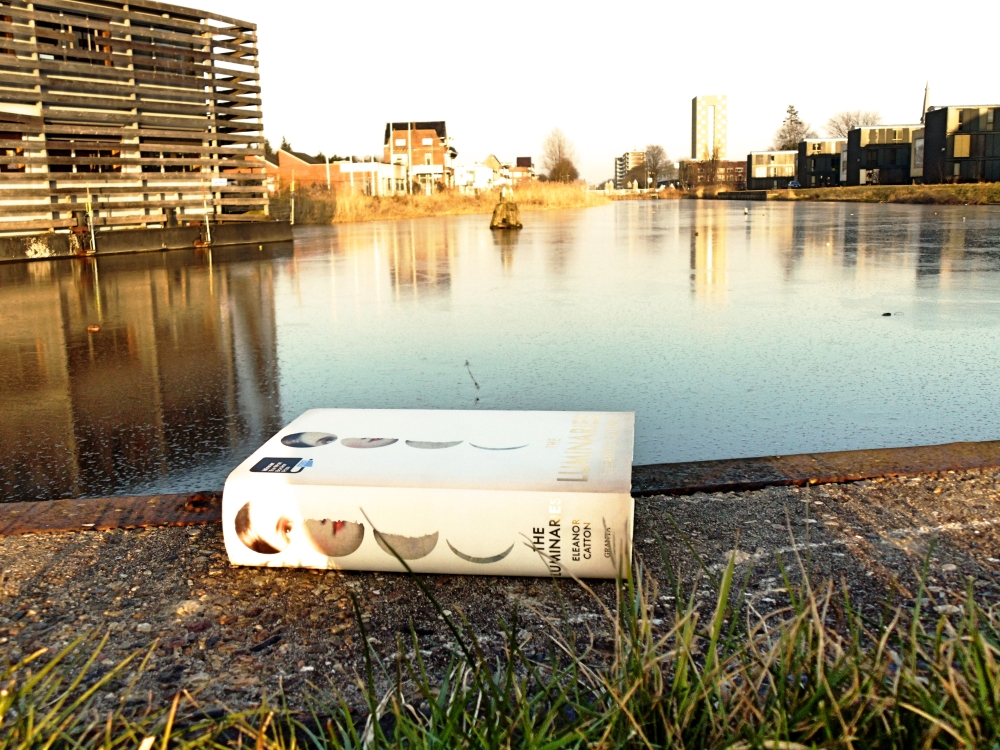 The story itself, as one can imagine from the sheer mass of The Luminaries, is intricate and complex. The plot does not follow a linear path, jumping instead not only from one character’s perspective to another, but also from 1866 to 1865 and from one month to the next. Imagine this novel like a massive puzzle with tiny pieces. Each character provides the reader with a certain number of pieces and together you start constructing a picture only to discover that a person has been lying, giving you pieces of an entirely different puzzle that don’t fit in yours. After you uncover the truth, right when you are about sure you have the whole picture, someone hands you a missing piece that contains information that entirely change the image. Not until the final piece is in place, does the whole puzzle make sense. Simply put, Catton pleases on both the historical and the mystery level of this novel.

The clock had struck the late hour of twilight when all colours seem suddenly to lose their richness, and it was raining hard; through the cockled glass the yard was bleached and fading. Inside, the spirit lamps had not yet succeeded the sea-coloured light of the dying day, and seemed by virtue of their paleness to accent the general cheerlessness of the room’s decor.

Most historical fiction books tell a story of WWI or WWII. Here we have a Man Booker winner, with an imaginative story of 1860s New Zealand, written in the beautiful prose of the Dickensian school that perfectly accompanies the rich and elaborate plot. A most refreshing and entertaining read for any historical fiction fan. 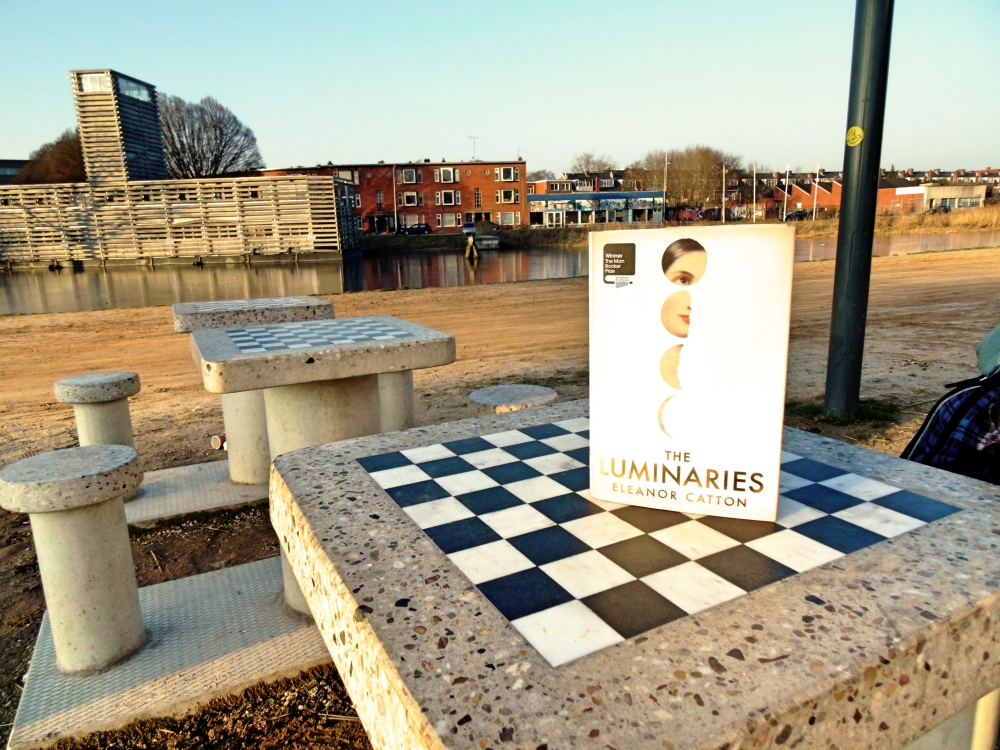