Book synopsis:
The life of a slave on a plantation farm is a terrible life, especially for a girl at the verge of womanhood. Cora has always lived a nighmarish existence on the Randall plantation among the slaves. The white masters are cruel but the Africans can be equally harsh. When she is offered the chance to escape she has to take it. The underground railroad might be her only salvation to freedom. 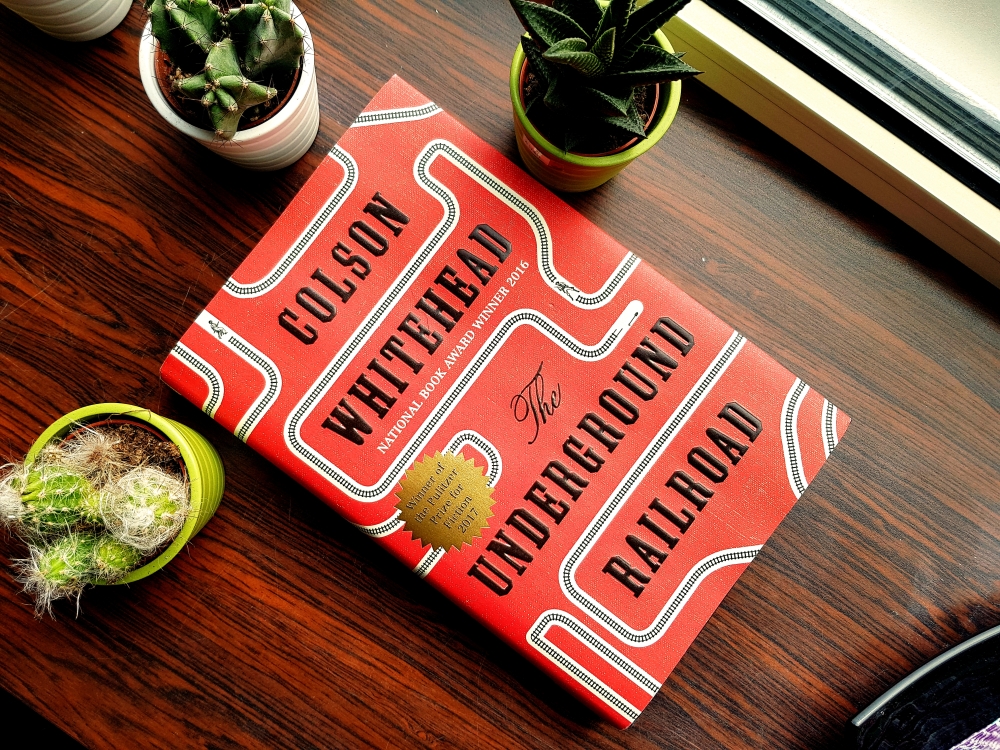 Read as part of my Project Man Booker 2017, The Underground Railroad begins a harsh journey from Africa two generations preceding Cora, introducing Ajarry, her grandmother. In a kind of prelude, Whitehead throws the reader into the hands of white men forcing Africans into dark, wet dungeons of ships sailing to the land of the free. Ajarry tries to kill herself twice, but is unable to escape. She is passed multiple times from different masters and ends up in the Randall plantation in Georgia where she eventually dies from a blood clot in her brain, among the cotton. She leaves behind a cursed legacy to her daughter Mabel, that of the slave’s life.

Mabel is born on the Randall plantation as did her daughter Cora. Endless labour was all they knew. Insubordination meant humilliation and harsh punishment, beatings and whippings. Loss of life was a common occurance. Slaves on the plantation were dictated to work according to their masters’ and overseers instructions. Slave owners not only had to oversee the work on the plantation was done but also make sure the black workers would never be able to organise an uprising. The constant threat of the lash ensured compliance.

Stolen bodies working stolen land. It was an engine that did not stop, its hungry boiler fed with blood.

When Mabel escapes the plantation she leaves Cora alone to fend for herself. Cora ends up resentful of her mother’s abandonment and can never understand how Mabel was able to leave her child behind and seek a better life for herself. Slave catchers are unable to find her and bring her back and so Cora becomes the daughter of Mabel, the one who got away. Because of that, her master’s treatment toward her is even nastier and she is also subjected to anger and antagonism by the other African workers. As she is quickly ascending the steps of adolescence, being rushed by circumstances to adulthood breaks her. Cora is gang raped by plantation workers, a fate very common to black girls and women of the time. When Ceasar approaches her with plans for an escape, it is because of Mabel that he chooses Cora as a travelling companion. Mabel made it out, she escaped. Her daughter may bring good luck. 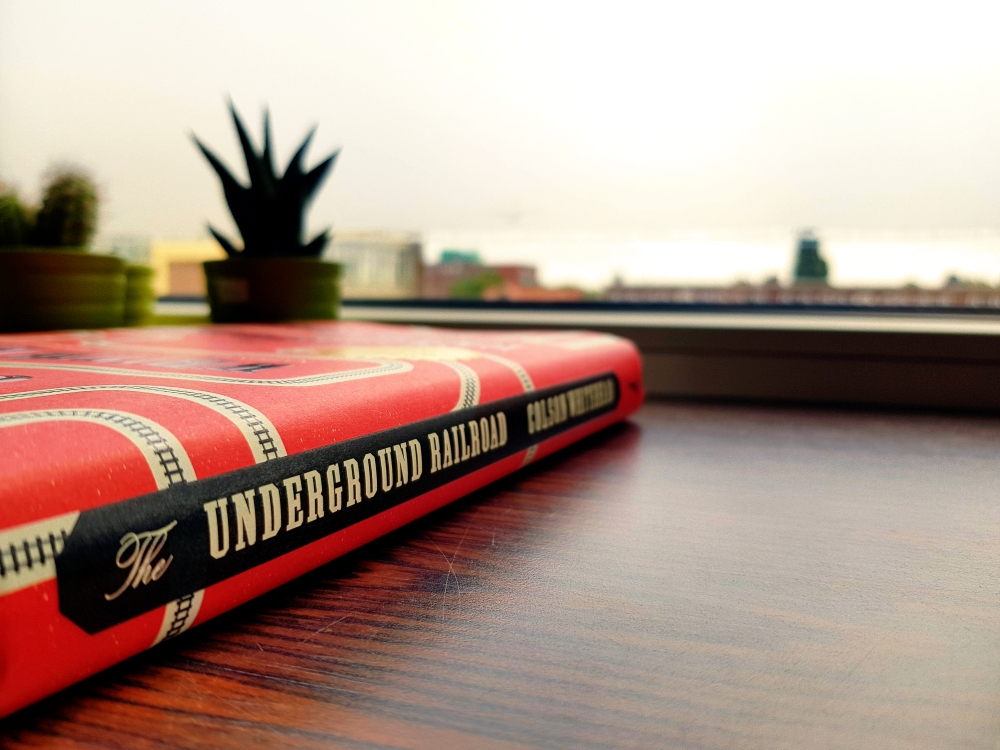 First petrified by the idea of escape, Cora has seen what happens to those who attempt it, she later realises it is her only choice. She will not stay and be broken. She will run. And so they turn to the underground railroad where Colson Whitehead easily jumps genres to the alternate history/science fiction realm where the underground railroad – a secret network of safe houses and escaping routes to free states and Canada used by African American slaves aided by abolitionists who aimed to end slavery – is reimagined  as a literal secret underground network of railroads where black people can get on a train in hopes to end up in a better place.

Following the principle of anywhere is better than here, Cora hops on the train to an unknown destination. She ends up in South Carolina where her tortured life is offered some much needed reprieve. Under a false name, Bessie, Cora is given a small taste of normal life under the assertive height of a skyscraper, an unprecedented sight in Cora’s eyes. Promises of a free life come crumbling down from that very 12-story skyscraper as Cora discovers that white doctors have been running syphilis experiments on black people. White supremacy in South Caroline is one reason she has to flee again. The other is Ridgeway. An ambitious, merciless slave catcher voluntarily followed – and adored – by a black boy he bought and made free symbolising blind compliance of black people in front of white power. Ridgeway on the hunt for Cora is on her trail again and he will not let her escape, not like Mabel. Mabel who, time and again, turns out to be the root of most of Cora’s hardships in life.

Cora didn’t know what optimistic meant. She asked the other girls that night if they were familiar with the word. None of them had heard it before. She decided that it meant trying. 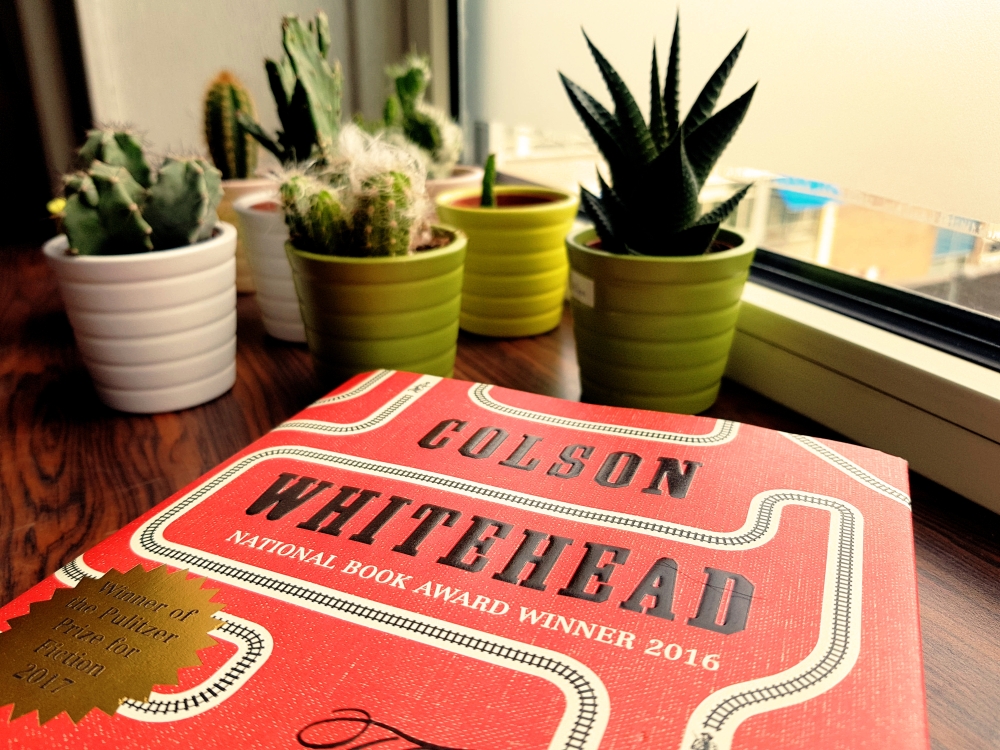 Talking about slavery in America is difficult to achieve in a comprehensive novel that attempts to reimagine black history without erring in interpretation or missing vital parts that an author can simple not go without. Colson Whitehead is not new to writing and it shows. It is evident from interviews that he was hesitant to begin this novel, unsure of the outcome but this hesitation gives way to confident and to the point prose in this Pulitzer and National Book Award winner. As if guided by a metronome, Whitehead’s pacing is steady and perfectly fitting for his story. Each sentence is to the point and achieves its purpose within the micro context of the paragraph and the macro context of the whole book.

A plantation was a plantation; one might think one’s misfortunes distinct, but the true horror lay in their universality.

One cannot be expected to write about slavery by means of shying away from violence, it is inevitable. But the way Whitehead does it, with a tone that I can only describe as unperturbed, measured, calm but also sharp. This is how things were, he knows it, acknowledges it and uses it to enhance his book. Colson Whitehead does justice to storytelling in a way that many would have failed to do in his place. With the casual – but also not – use of terms like pickaninny, buck and nigger. Whitehead stands tall and unquivering while being repeatedly slapped by history in the face.
The Harvard graduate has been the recipient of the MacArthur Fellowship, also known as “Genius Grant” given annually to 20 to 30 American individuals of “extraordinary originality and dedication in their creative pursuits and a marked capacity for self-direction, celebrating his potential. The Underground Railroad was read and highly praised by President Barack Obama and is one of the selected titles for Oprah’s Book Club.

Slavery is a sin when whites were out to the yoke, but not the African. All men are created equal, unless we decide you are not a man.

The novel in review is undoubtably much praised and widely read, a work of originality and talent working together towards a grand result. For a reader from Greece whose knowledge of slavery in America reaches the bare minimum, it is not the easiest book to understand on the first try and without any previous research. The first 70 pages of the book paint a realistic portrait of plantation life which lacked the presence of Cora. In fact, Cora felt more of a character through whom the reader experiences the plantation and happenings in a girl’s life, terribly missing the emotional part. Following Cora’s escape the reader is allowed intimacy with Whitehead’s protagonist and is given entry into her thoughts. She comes closer but never quite close enough. She is given individuality while maintaining a place among the many, the crowd, one of the slaves. You can never be yourself when you can’t even be someone.

And America, too, is a delusion, the grandest one of all. The white race believes – believes with all its heart – that it is their right to take the land. To kill Indians. Make war. Enslave their brothers. This nation shouldn’t exist, if there is any justice in the world, for its foundations are murder, theft, and cruelty. Yet here we are.

In the chaos of Cora’s life and of the lives of so many others in America the question is inevitable: is freedom really ever attainable in a place where black people are not even considered humans but something less, something beneath? Is freedom a concept that actually exists when you cannot turn to white or black man for help and no, you can’t even help yourself. Is there any point in running?

Cora believes there is and Whitehead believes it too.