The Girl With All the Gifts by M.R. Carey

The zombie genre has steadily become more and more popular, considering its dawn with George Romero’s films in the 70s to its current life as TV series in The Walking Dead, experimental mixes with classic fiction – Pride and Prejudice and Zombies, for instance – and, of course, one cannot leave out the graphic novels. In this era of consumerism however, it is difficult to keep the public interested for long, especially in a genre that really has presented all of its cards on the table over the years. There simply isn’t a zombie story left untold. It is now a matter of  the creator doing a good job, and of the consumer being a fan of the tried and true recipe of zombie tales.

And then like Pandora, opening the great big box of the world and not being afraid, not even caring whether what’s inside is good or bad. Because it’s both. Everything is always both. But you have to open it to find that out. 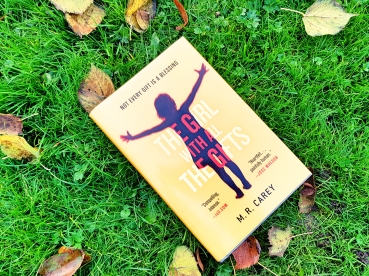 Okay, I’ll admit I have a sweet tooth for zombie fiction, or more generally, disease-spreading fiction. M. R. Carey’s take on the post-apocalyptic landscape left behind by the brain-eating fungus known as Ophiocordyceps Unilateralis certainly promises to be the escapism life sometimes requires. And the beginning is oh so exciting. We meet Melanie, a little girl who lives in a cell underground inside a secure military facility. Every day Melanie is strapped on a chair and rolled into the classroom where she can see her friends. Well, see the ones sitting in front of her, since the straps don’t allow for even the slightest head movement. These otherwise seemingly normal children are actually flesh-thirsty zombies who, at the smell of humans, will transform into feral beasts. Their teachers and army men mask their pheromonal scent with chemicals they apply to sweat inducing areas before walking in the classroom.

The truth is the truth, the only prize worth having. If you deny it, you’re only showing that you’re unworthy of it.

Melanie’s favourite days are Ms Justineau days. When Seargant comes in her cell every morning she hopes today’s class will be taught by Ms Justineau who teaches them all about Greek mythology and reads them stories. Where Sargeant is a tough-looking man who sees children as the dangerous, fungal-controlled creatures that they are, Ms Justineau is kind and loving and treats the children with motherly care that their human side of them desperately yearns for. The third side of the argument comes from Dr Caldwell who represents the cold and determined scientist for whom Melanie and the other kids are extraordinary specimens of great scientific value. The novel starts off then with Melanie, an extremely intelligent and intuitive girl, hesitant in the face of Sargeant’s harshness, afraid of Dr Caldwell’s blind determination to learn and utterly captivated, even maybe in love with Ms Justineau’s kindhearted nature.

Every adult grew from a kid who beat the odds. But at different times, in different places, the odds have been appallingly steep.

As Carey gives the setting of this army facility somewhere in England, in the midst of an apocalyptic, barren world ravaged with zombies and relentless groups of humans, the kind one finds in The Walking Dead, the reader is excused to forget, for a minute there, that this is yet another zombie story. Indeed, the beginning of The Girl With All the Gifts feels original, and is exciting enough to get you past the first 100 pages in a rush, to see where the author is headed. Surely enough, things quickly go awry as the base is overflown with a zombie horde led by men with spears, a scene so heavily based on being impressive that it completely abandons the notion of being realistic, and Melanie escapes with Ms Justineau, Sargeant Parks, private Gallagher and Dr Caldwell, a group of individuals with conflicting goals outside in the wilderness of an England overtaken by zombies.

Melanie thinks: when your dreams come true, your true has moved. You’ve already stopped being the person who had the dreams, so it feels more like a weird echo of something that already happened to you a long time ago. 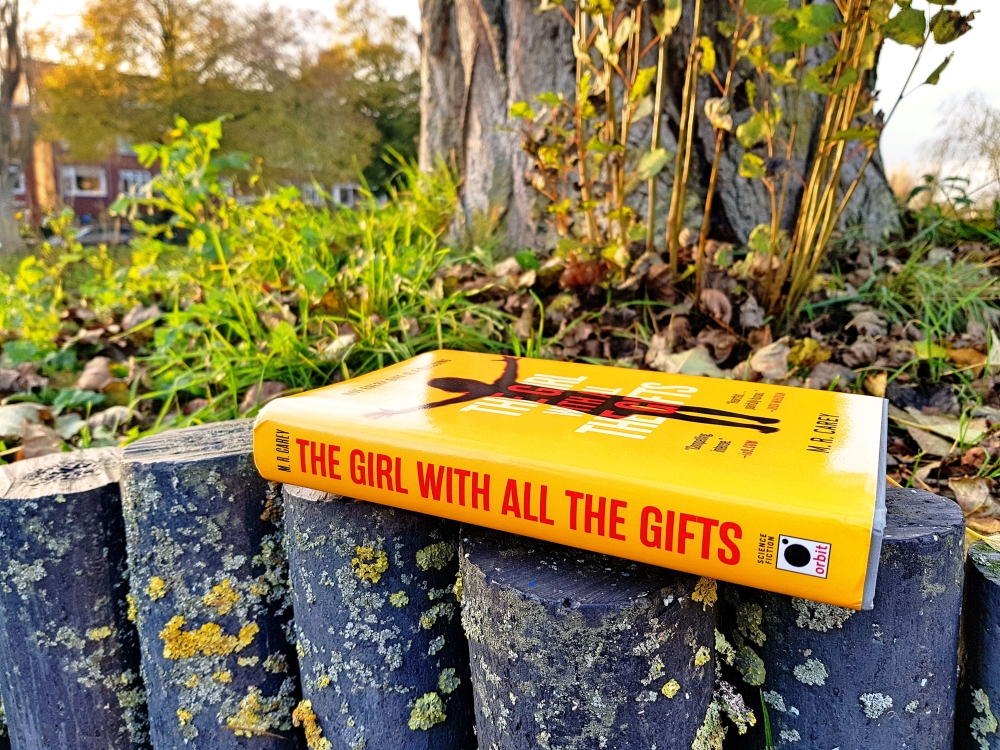 From then on, the story goes downhill as it turns to the basic plot following a small band of survivors navigating the perilous terrain. Now, it comes back to the two points that will make or break this reading experience: does the reader enjoy the basic post-apocalyptic zombie storyline and does the author do a good job in creating this book? Now, if you are like me, the first condition holds true. Unfortunately, this is a sufficient prerequisite which allows you to finish this book even though it turns out to be hardly enjoyable reading. The weakness of a book already expected to follow a predetermined path laid out by years of telling the same or similar stories, lies with the characters which fall flat and uninteresting. Melanie’s two main attributes are that she has an obsessive love, as all children do at that age, for Ms Justineau. This utter fascination and admiration with her teacher is completely believable and feels very familiar, at least to me, but it never goes beyond that. Melanie can be excused as she is a child, and one can only expect so much from a character that, by definition, should not be completely formed, but that is not true for the adults of the group. Sargeant Parks is the tough guy who has “seen some shit” and, predictably, actually bears the scars of dangerous encounters that have shaped his unrelenting interior and his rough-looking exterior. He is the guy who is weary and distrustful of Melanie. Well, we all know where that storyline goes, don’t we. Then we have Dr Caldwell, a woman who only cares about scientific knowledge and advancement. She is, of course, the most dangerous individual of them all. And finally, Ms Justinaeu, a character that is meant to be liked, turns out to be a stupid woman who not only cares little for basic survival do’s and dont’s, but also defies logic with her complete idiocy. 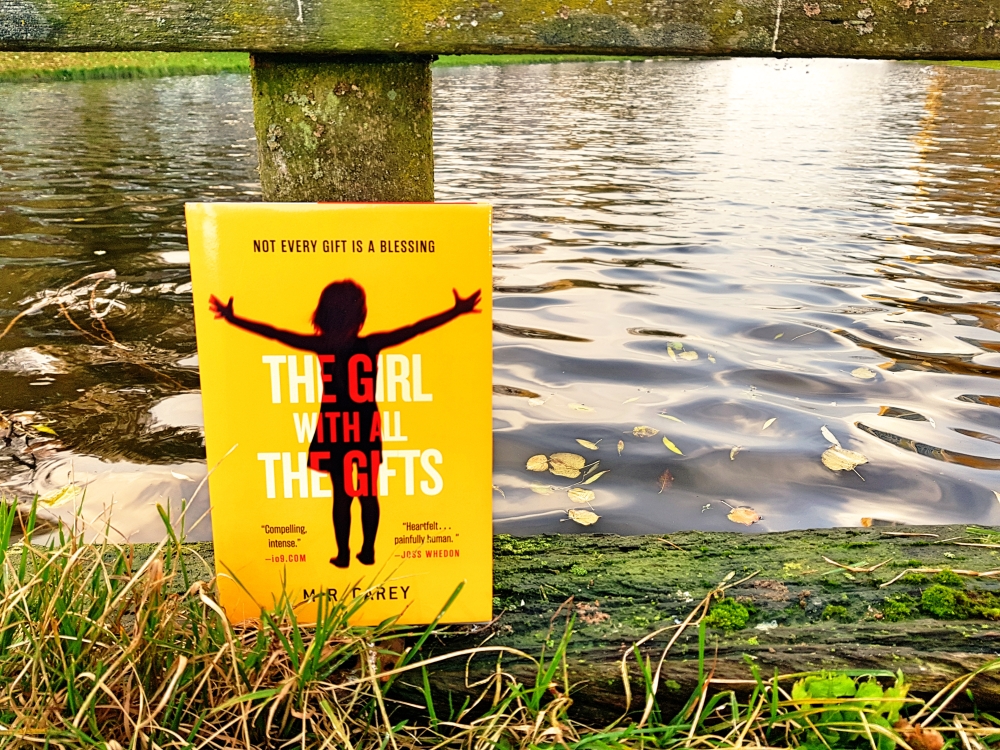 A fan of the genre would expect to at least get some entertainment value out of zombie stories written in the 21st century as, realistically speaking, expecting more than that, say originality, is rather unrealistic. And yes, The Girl With All the Gifts is entertaining, until it becomes frustrating. By then you are more tan halfway through the story and thinking it’s a shame to give up on yet another book this year so you just push through, complaining, already planning on watching the movie soon after. Or was that just me? The Girl With All the Gifts is everything it was expected to be. In that sense, it doesn’t disappoint those who know what they are looking for in such a setting.

BookDepository: The Girl With All the Gifts