In an article of the most recent Interzone magazine, British writer Aliya Whiteley discusses science fiction as a genre that does not follow key scenes and expectations like one would expect in genres like romantic comedies or heist movies. She writes for example,

a heist movie inevitably includes a planning sequence, and a meeting of team members.

And a point where something goes wrong and everything falls out of plan, might I add.  Marina J. Lostetter is freely playing with the genre and its lack of restrictions in terms of plot, in her debut novel Noumenon, an imaginative story that opens the curtains for this author with great potential.

It starts with a young astrophysicist, Reggie Streifer, who has observed that a distant star he calls LQ Pyxidis, is behaving…strangely. It seems like all the energy of the star comes out of a single spot around its sphere, as if it is encapsulated within a massive structure, much like if someone dipped a lightbulb in paint but missed a spot. Were the lightbulp to be illuminated, the light coming out would be dimmed except for the missed part where light can come out freely from. Is this a possibility of first contact? Streifer’s discovery is intriguing and the humans of the late 21st century are curious beings. A mission of nine spaceships is funded by the Planet United Consortium to travel to LQ Pyx – a journey that will take eons – and do what humans do best. Gather information.

While the journey will last a few generations for the ships, time will not pass the same for people on Earth. Interstellar travel requires entering subdimentional cruising which means that eons will pass on Earth before the mission returns – if they do. Of course, dividing a million people in nine space ships and sending them off to spend a few centuries locked up in bubbles lost in space presents a few problems. Creating a society that is harmonious and avoiding mutiny and other situations that can prove devastating for the mission requires creative solutions. The answer that sociologists and psychologists come up with is: clones. If one can pick and choose people with high intellectual and emotional intelligence that can crew the ship and provide invaluable services as members of the convoy while maintaining order and coexisting in such a constricted environment, one can also replicate the genetic makeup of this people. Many times.

But, as all psychology undergraduates learn in the first year of their degree, human behaviour is influenced by nature and nurture. The environment plays as big of a role as genetics in forming a human. Thus, clones are not the same as their originals and human behaviour is, as has always been, unpredictable. 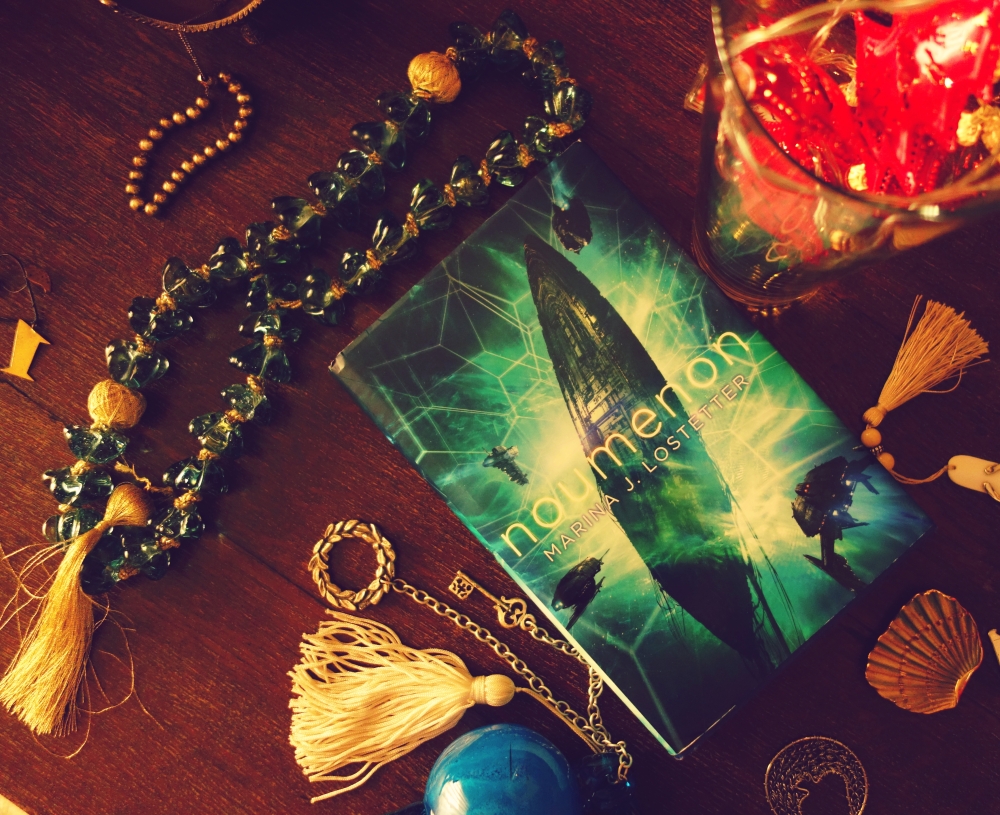 Noumenon bursts with ideas but Lostetter pulls it of. Going into this story, the first thing I noticed was the structure. It is a story divided into multiple character chapters that comprise stories of their own. Much like Semiosis by Sue Burke, another science fiction debut novel that came out early in the year, which spans generations and tells the story of humans arriving on a new planet and their attempts at inhabiting it. Unlike Semiosis though, Noumenon is a story that balances character-driven and plot-driven storytelling with great results. Getting to know characters for only 40 or so pages makes it difficult to connect to them and see the person that is supposed to be represented within the words. Problems can often result in flat, uninteresting characters, or individuals who present no difference among each other. It is no easy task for an author to undertake, and yet Lostetter’s characters are successful. Their personalities spring out from the book and become individuals with desires, humour, knowledge, and faults. What Burke fails to create in Semiosis, characters with personality acting on an interesting plot, Lostetter does, and does very well.

Each character follows their own subplot which manages to keep the reader entertained and adds to a story that spans generations without making the events seem forced. Even though the gaps are huge between chapters, the story flows, and the pieces come together to support the whole. A story made by an author who keeps wondering “what if this were to happen” and then elaborates on it. It is multilayered without being overwhelming, even for readers who are not familiar with the genre.

Still, the novel is not perfect. There are times throughout the book where the author’s finesse slips and the results are..mediocre at best. But these time that the author looses her rhythm are few and far between so that the reader does not need to put conscious effort in not giving up on the story yet. It is like you can see that Lostetter had fun writing most of the story, but she got a bit lazy with some small parts. And while the reader gets accustomed to a fast-paced story that keeps evolving from one scene to the next, the book considerably slows down eventually coming to a slow end.

It is a very strong first novel, and I for one am interested in following Lostetter in her next steps. The follow up to Noumenon, Noumenon Infinity came out earlier this year and is one I will be sure to check out soon.